Before I left on my trip I did a bit of research – specifically for vegan and vegetarian restaurants in Russia. I heard that it might be a challenge to eat well as a vego in Russia and I didn’t want to starve. Over the next couple months I am going to try and share some of delicious places that I have tried around the world. (Complete with pictures if I was brave enough to take out my Camera… which I clearly was not while in St Petersburg.)

I stopped by this cafe on my first day in St Petersburg when I was all alone. I had read that Cafe Ukrop had English menus, so I knew that I would be ok there. The cafe is quite cute but on the first floor they don’t speak any English. The guy behind the counter smiled, but then opened a notebook that had various English phrases written out. He pointed to: English Restaurant upstairs.

The Restaurant was very nicely decorated, very clean and modern and very organic. The menus were clear and just about every dish looked amazing. The vegan dishes were marked, as were raw dishes and anything that you add milk or cheese to.

I settled on a potato, pea and cucumber salad with a cashew mayonnaise and lots of dill – Those Russians love their dill. I was craving vegetables in a bad way, so I also had a carrot juice. Gotta keep my orange glow.

I would definitely recommend this place for vegans and veggies alike. I didn’t try their desserts, but they looked amaze. I found all these places on HappyCow.com so check that out too – usually opening hours are listed but most places in Russia are open late (9 or 10)

We visited Botanika on our second day. And then our third. And then our fourth. They, too, had an English menu and waitresses that were adorable. On our first visit, Sean and I both had a juice and I went the full Russian and followed that up with a beet salad and then some Borsch. BEET OVERLOAD (but not – I could eat Beets forever.) Both dishes were sooooo good. Sean had a Dillwich, whichh was some kind of wrap – and a mulled wine. The prices were reasonable and the food was so comforting.

We returned the next two days for multiple coffees. Mostly cause the waitresses were so cute.

The Idiot was our restaurant of choice for our night out to the theater. We arrived at about 6.15pm and were greeted and seated immediately. The decor was very homely – it kind of felt like I was in a Babushka’s dinning room. There were tall candles on each table and china cabinets against each wallpapered wall. It was sort of in the basement of a building which made it a very cozy place to dine. The menu was in both Russian and English with some charming spelling and grammar mistakes. We opted for the non-smoking section, but pretty much everyone smokes in Russia and you can do it pretty much everywhere – so that is something to keep in mind, it was rather smokey.

The best part about the Idiot is by far the bread basket. It comes with about 5 different kinds of the best bread ever. They also bring you a trio of flavoured butters (not vegan) but still a nice touch.

For drinks we ordered a honey and pepper spiced shot of Vodka (when is Russia) and Sean got a beer while I ordered a wine. Upon serving our drinks the waitress also brought another complimentary shot of vodka from the bar. So just to sum up – 2 shots each and an extra drink. I have read that they give this complimentary shot to everyone. Bonus! 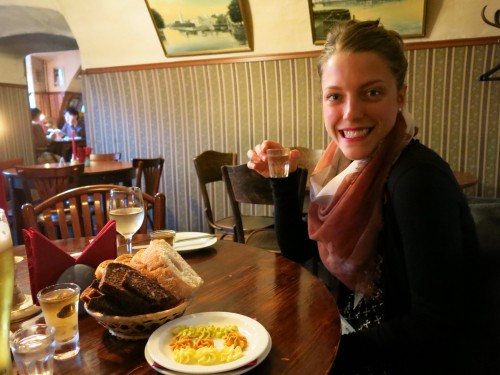 I had a delicious meal of salad and with an odd main that ended up being a ginormous plate of green beans. 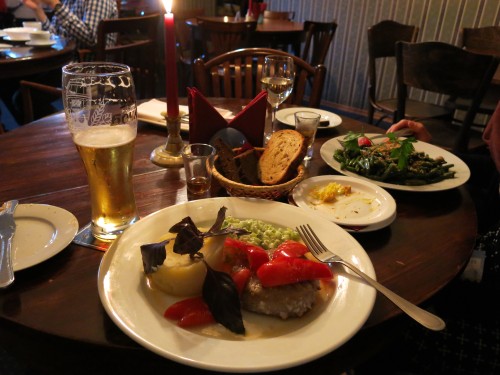 I would suggest trying something with a bit more variety – but just a side note, those beans were AWESOME. 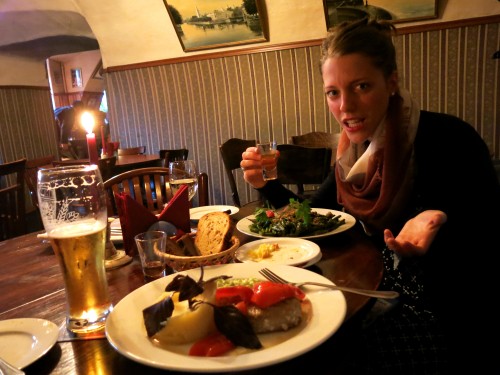 Sean ordered a burger – which he said was awesome… but why didn’t it come with a bun? Peculiar.

Still a great place – a bit more expensive but really nice for a night out.

🙂
See you in Moscow!