The bread of my dreams…

I’ve been dreaming of making this bread for weeks, months even. And since Monday I have had the uncontrollable urge to stare at pictures of it and study every recipe and every version that I could find. It didn’t take much to find a vegan version… so I’ve been researching and gathering ingredients since my Monday evening grocery shop. With all that being said, the research, the studying, the drooling… its actually kind of impressive that I STILL misread the recipe and forgot a step. But… that’s not unusual coming from me.
…
This past week was beautiful and such a stark contrast to last week. Not a drop of rain. Beautiful sunny days, crisp mornings and cool evenings. Perfect running weather, very ‘autumn in Canada’-esque. The days are definitely getting longer, too. The sun is just setting as I leave work. I’m so ready summer nights…

But in the mean time, the best baked good are those suited to the cool weather. Conditions were perfect; beautiful day, gorgeous light, Sean was going biking… the apartment would be empty and I would be able to play music, throw flour and dominate as much space as was necessary for baking and photography needs, which is of course the entire apartment. 🙂

I started as soon as I woke up. I can never find applesauce at Woolworth’s, so that was my first task, fresh applesauce. Next I whipped up some dough, and then left it to rise for the next hour as I doodled about and went for a run.

When I returned, I tried my hand at the kneading process, something I have zero experience in… so I really have no idea how I went at that. I’m seriously considering taking the bread making course at the North Sydney community centre in August. I seem to have quite a few gaps in my bread baking knowledge.

I allowed the dough to rise for another 5 minutes and then rolled it out for filling and constructing the pull-apart deliciousness. The rolling was especially hard, for a couple reasons. First of all, I don’t really have a flat working area… and second of all, my working area was just a hair bigger than how big the dough was supposed to be rolled. Dilemma.

After to some strategic rolling, pulling, rotating and measuring, I smeared the filling over the dough with my fingers, and then sliced it, stacked it and bunched it up into the bread pan.

It was looking kinda pathetic, yet still delicious, so I snapped some pictures and popped it into the oven. It wasn’t until 10 minutes into baking that I realized I had forgotten the all important second rise. Idiot.

Well… not bad for a first attempt. I’m thinking next time I’ll work on my kneading skills, remember to let it rise, and then perhaps add some pumpkiny goodness? Yummm… 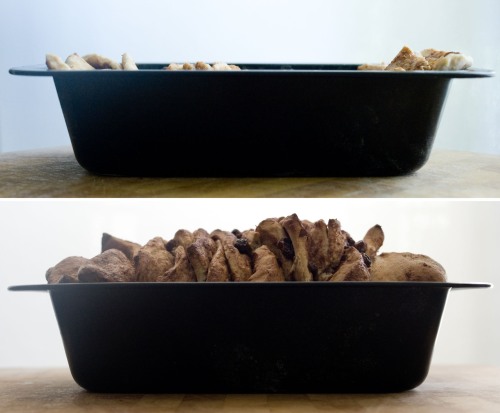 The result was still gorgeous. Deep golden tips and a lovely cinnamon-raisin insides. I think it needed a bit more moisture, but it was amazing with a nice strong cup of coffee.

Even with my minor screw-ups, Sean managed to enjoy half a loaf when he got home later. 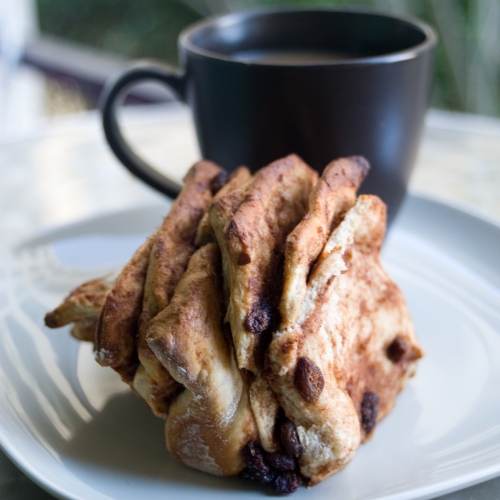 That boy might just be growing tired of my photographing his every meal. He was whining through most of my pictures, particularly when I moved outside to get better light. He was not impressed. Perhaps if he didn’t eat all of my baking in one sitting I wouldn’t have to take so many pictures of it in such a hurry. Just sayin…

In a large mixing bowl, combine 2 cups of flour, 1/4 cup sugar, baking powder, cinnamon and 1/4 salt. Add 5 tbsp applesauce and yeast mixture and stir to combine. Add in another 1/2 cup flour, stirring to combine with a spatula. Continue mixing until you have a sticky dough ball. It will take a while to all come together, but it will.

Place the dough in large, oiled bowl and cover with plastic wrap and a kitchen towel. Place in a warm area and allow it to rest until doubled in size, or about 1 hour.

While the dough rises you can whisk together the brown sugar, cinnamon and applesauce for the filling. I found this filling very thick, and not very good for spreading, so I added a bit more applesauce, but this is probably where I would add pumpkin instead of applesauce, and maybe more than a tablespoon. Maybe a 1/4 c.(?)
Grease and flour a 9×5×3-inch loaf pan. Set both aside.

Sprinkle remaining flour on a flat surface and knead dough, kneading in most of the flour. Using a floured rolling pin, roll dough into a large thin rectangle, about 12-inches tall and 20-inches long, or roughly as large as you can make it, depending on the size of your petite kitchen.

Using your fingers, or ideally, a pastry brush, spread the filling across all the dough. Sprinkle with additional brown sugar if desired. Sprinkle raisins evenly across the dough and eat a lot of them.

Slice the dough vertically into strips and stack strips on top of one another and slice into strips again. Be sure they will fit into your baking pan. Layer into your greased pan and cover with a kitchen towel and allow to rise for 30-45 additional minutes. (don’t forget this part… idiot)

Preheat to 350 degrees F and put the baking rack in the center of the oven. Bake for 30 to 45 minutes until tips are deeply golden brown. Mine was a bit doughy in the center, so be sure the tips are quite dark which will ensure that it had been in for long enough.

Allow to cool for up to 30 minutes before removing from pan and onto a clean surface or serving dish. Serves 2 greedy people. just yank it in half.